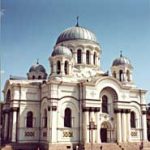 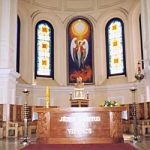 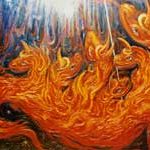 The subject for the painting was chosen according to the Gospel “REVELATION TO JOHN” where the fight of St. Archangel Michael with the fiery dragon, that ancient serpent called the Devil and Satan is most picturesquely described. “REVELATION TO JOHN” is the mystic vision in the spiritual level given to the Man by the Lord. By this revelation the Lord revealed the events of the future to the people in a complicated symbolic and mystical form. Every image and event seen by John in itself has profound figurative meanings. In the upper part of the painting the revealed heaven and thrones from which the divine light is flowing is arranged. In the centre the figure of fighting and won St. Archangel Michael throws the Satan down to earth and blocks his way to return back to heaven. Vertical and static pose of St. Archangel Michael symbolizes spiritual peace, balance and strength. He is opposed to the fiery dragon, that ancient serpent called the Devil and Satan which is arranged in the bottom of the painting horizontally as a sign of loosing the fight.
The fiery dragon having seven heads, ten horns and seven diadems on the heads is depicted fallen on earth, but still resisting St. Archangel Michael. The fiery burning of the dragon symbolizes the passion destroying everything which is a contrast to the spiritual peace of St. Archangel Michael.
In this painting the words of Jesus to which angel warriors are leaning closely are emphasized: “Don’t be afraid. I have conquered the world”.
The structure of the composition of the painting is composed of 88 symbols and symbolic groups.
Virginijus Kašinskas